A Look Back
The Siberian Husky is widely  believed to have originated from  within the Chukchi Tribe. A tribe whose culture was based on the long-distance sled dog. Siberian Huskies were also used in the 1908 All-Alaskan Sweepstakes.
Right Breed for You?
Siberians are relatively easy to upkeep. However, their thick coats require weekly brushing. New owners should  be prepared to provide an outlet for exercise daily, whether through walks or an enclosed space in which to run. 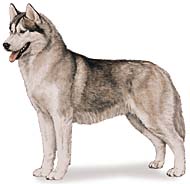 General Appearance
The Siberian Husky is a medium-sized working dog, quick and light on his feet and free and graceful in action. His moderately compact and well furred body, erect ears and brush tail suggest his Northern heritage. His characteristic gait is smooth and seemingly effortless. He performs his original function in harness most capably, carrying a light load at a moderate speed over great distances. His body proportions and form reflect this basic balance of power, speed and endurance. The males of the Siberian Husky breed are masculine but never coarse; the females are feminine but without weakness of structure. In proper condition, with muscle firm and well developed, the Siberian Husky does not carry excess weight.
Size & Proportion
Height--Male, 21 to 23½ inches at the withers. Female, 20 to 22 inches at the withers. Weight--Male, 45 to 60 pounds. Female, 35 to 50 pounds.
Coat
The coat of the Siberian Husky is double and medium in length, giving a well furred appearance, but is never so long as to obscure the clean-cut outline of the dog. The undercoat is soft and dense and of sufficient length to support the outer coat. The guard hairs of the outer coat are straight and somewhat   smooth lying, never harsh nor standing straight off from the body. It should be noted that the absence of the undercoat during the shedding season is normal.
Color
All colors from black to pure white are allowed. A variety of markings on the head is common, including many striking patterns not found in other breeds.
Temperament
The characteristic temperament of the Siberian Husky is friendly and gentle, but also alert and outgoing. He does not display the possessive qualities of the guard dog, nor is he overly suspicious of strangers or aggressive with other dogs. Some measure of reserve and dignity may be expected in the mature dog.   His intelligence, tractability, and eager disposition make him an agreeable companion and willing worker.
Tweet